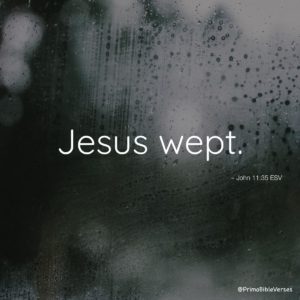 When Jesus saw her weeping, and the Jews who came with her also weeping, he was greatly disturbed in spirit and deeply moved. He said, “Where have you laid him?” They said to him, “Lord, come and see.” Jesus began to weep.

Last Tuesday evening, 400 lights around the Lincoln Memorial’s reflecting pool were lit to honor the 400,000 people in the U.S. who have died from COVID-19. In that moment, as I watched from home, I found myself overwhelmed by the sheer scale of our loss. I found myself thinking of everyone who loved them – mothers, fathers, brothers, sisters, spouses, and friends. It was too much, and the great dam that I had erected within myself over the last year to hold back the tears gave way and I found myself overcome with a mixture of anger and grief.

When Jesus sees Mary and the other Jews who are weeping over the death of Lazarus, he is “greatly disturbed in spirit and deeply moved.” This phrase translates a Greek word that means angry and indignant. These emotions reveal our Lord’s humanity. In his empathy he was overcome with grief and he was angry at death and the suffering it brings.

Jesus is the “resurrection and the life (John 11:25),” and Jesus’ example shows us that heartfelt mourning in the face of death does not indicate a lack of faith but honest sorrow and anger at the present reality of suffering and death.

While we should always face death in light of our gospel hope in the resurrection, it is vitally important for our spiritual and emotional health to be honest with our grief. It is important to be honest about our loss as individuals and as a nation, and to take time to recognize, honor and mourn all those who have died.