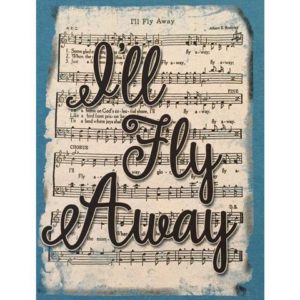 I’ll Fly Away is likely the most recorded gospel song of all time.  Since its publication in 1932, the song has been recorded by thousands of artists and has sold millions of copies.  Today there exist over 5,000 licensed recordings of the song according to the I’ll Fly Away Foundation (yes, that exists) and it has been recorded in countless languages.

As it has been for innumerable musicians and music listeners, “I’ll Fly Away” has been a treasure of life for me.  Not only do I love hearing all it’s different permutations (from early folk recordings to hip hop) I do love singing it!

The man who wrote “I’ll Fly Away”, Albert Edward Brumley, was born and raised in rural Spiro, Oklahoma, before attending the Hartford Music Institute in Hartford, Arkansas, in 1926.  Three years later he returned to Rock Island, Oklahoma (just a few miles from his birthplace) to help the family plant and pick cotton.

Anyone who has performed any bit of farmwork understands the intense physical and mental labor involved, so there can be no doubting this quote of Brumley’s: “Actually, I was dreaming of flying away from that cotton field when I wrote ‘I’ll Fly Away;”.

In fact, as is often the case with musicians, he was inspired by a song that had been popular since 1924. “If I Had the Wings of an Angel” (or “The Prisoner’s Song”, which Johnny Cash cites as the first country song to ever sell a million records.  So clearly, the theme was nothing new.  But there’s plenty of space in the world for songs about flying away, so Brumley continued working on the song until 1931.  Finally, in the fall of 1932, the Hartford Music Company published the piece in their songbook, The Wonderful Message.

The song to it’s core is Gospel Music.  The Christian- influenced lyrics rely heavily on the image of departing this life which is full of suffering and joining God in the after-life.  The words brim with joy turning the stereotypical fear or sorrow of death completely on its head in “I’ll Fly Away,” the prospect of death is a bright one.  Because of the prominent lyrics, the vocal element is essential to Brumley’s hymn, as is the case with many gospel songs.  Finally, the addition of harmony, through individual singers, full choirs or instrumental accompaniment, round out the piece with that communal spirit reminiscent of church singing.

“I’ll Fly Away” is a song like most traditional spirituals, intended to be sung by anyone and everyone.  I would argue that it demands the voices of amateurs, so that they too can join in the peace and joy that it brings.  The proof of this, my belief, has been borne out over the years and made no more evident than as I’ve listened to the residents of assisted living homes and recreation centers perk up to this tune.  With voices raised and smiles on their faces, even those in wheelchairs raise a joyful noise together.  While watching them sing, you can almost see what they see as they mimic the movement of a bird’s wings and imagine themselves ascending into Heaven.  A song that I learned, sitting at my father’s feet, surrounded by some of the finest musicians around, “I’ll Fly Away”, has always been a favorite.  I pray that the renditions below will bring joy to your hearts today and help to lift any burden that may be pressing on your heart.

Grace and Peace to you!   Carolyn